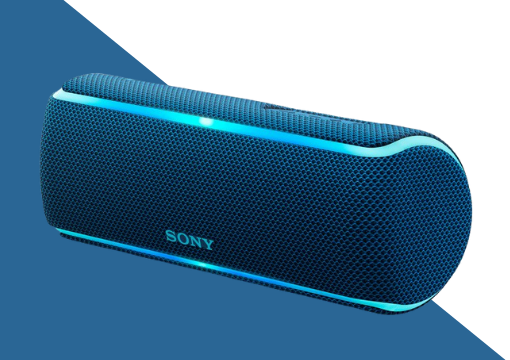 Check Out On Amazon

Sony SRS XB 21 is the most affordable bluetooth speaker as compared to its big brothers like XB 31 XB 32 ,etc. The entire XB series is dedicated to Party Boost.

Keeping the tradition of high prices, the XB 21 is priced at almost eight thousand Indian currency and is made of suitable quality plastic with a universal choice of 2018.  The fabric is covering the entire speaker. The two lines you will see going from the front of the speaker all the way to the side are single coloured LED strips, although there are only just two LEDs in the front of the speaker.  Please note that based on the speaker colour you choose the LED colour will vary. If you want multicoloured LEDs, go for the higher models.

The speaker feels well built and solid but not too heavy for everyday carry. The usual controls are on the top of the speaker. Next to the port’s you can find three buttons, the battery button, WPC and an add button. Pressing the battery button gives you a vocal confirmation of the battery percentage.

The entire XB series is IP67 rated or in simple terms water, dust and shockproof, and being a Sony product, of course, you get NFC.

Being an extra-base branded product, it sounds clear and crisp. The mids and vocals sounded pretty clear. The bass was really superb living as it’s an extra bass name tag—excellent lows with some nice punchy feeling. The speaker for its size gets pretty loud and has almost no distortion at full volume. Fortunately, the speaker doesn’t dance at 100%.

The only negative I would say is there is no way to know if you reach the full volume. Cheaper speakers have a notification tone when you reach the highest capacity but other than that I am delighted with the performance of this XB 21.

Unlike most Bluetooth speakers out there, you can download an app by Sony called the Music Center app to go along with the speaker that gives you more features. You can control like different sound modes, LED modes, EQ, connecting more than 1 XB speaker. Also, you get something called party booster which means you can tap on different spots on the speaker, and it will make different instrument sounds. It can be customized from the app.

Keep in mind one thing; if you use the speaker in the normal way through the Android settings, you won’t get much of the features.

To get all these features, you need to connect it through the app.

Fortunately, you do get the typical range of most Bluetooth speakers with some very occasional choppiness. The battery life is something that I’m not that impressed with; it lasted for a pretty decent 10 hours at approximately 65% volume. It took me around four hours to fully charge from the dead.

So what’s my final verdict?

The Sony SRS XB 21 gets a definite thumbs up from me even though the battery life is just okay. If you have the money to spend on a good base, water resistance, and overall sound quality, then go with the XB 21 for sure. If you feel like you want a little bit more bass and more colourful LEDs, check out the bigger brothers the XB 31 or the XB 41.